The Gutter’s who is: series of portrait presentations shows extraordinary individuals in their natural habitat, this month’s pick is valentina belleza, a German model living in Berlin. Starring in multiple music videos, the published model often recognized by her tattoos has been printed on apparel, featured in nationwide advertising campaigns and has also been the face of countless fashion collections. With such a résumé to show it is hard to believe that Valentina is a mere 22 years old, and all by herself, built up a successful life in the German capital. We visited her in one of Berlin’s scene-districts, Prenzlauer Berg, and talked about how life has been treating her. 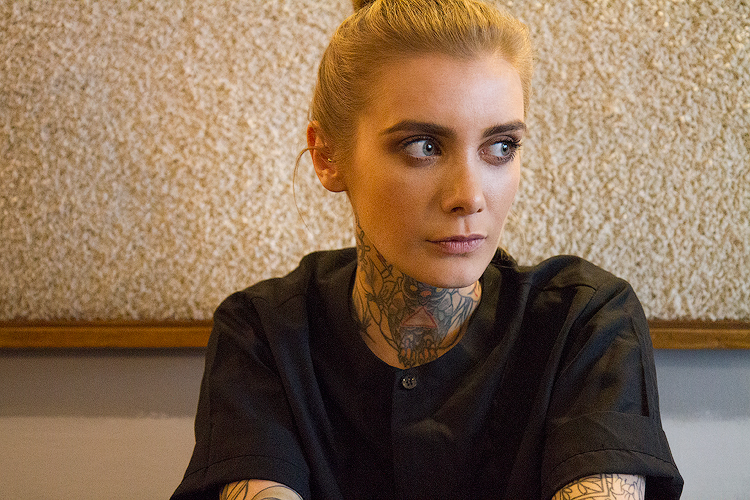 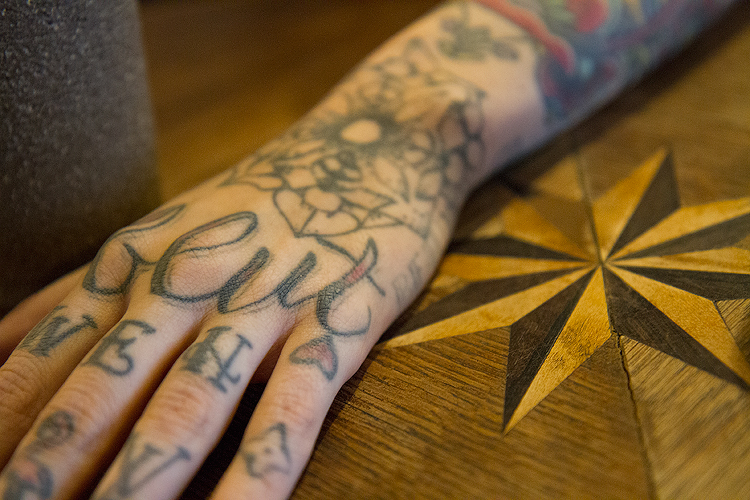 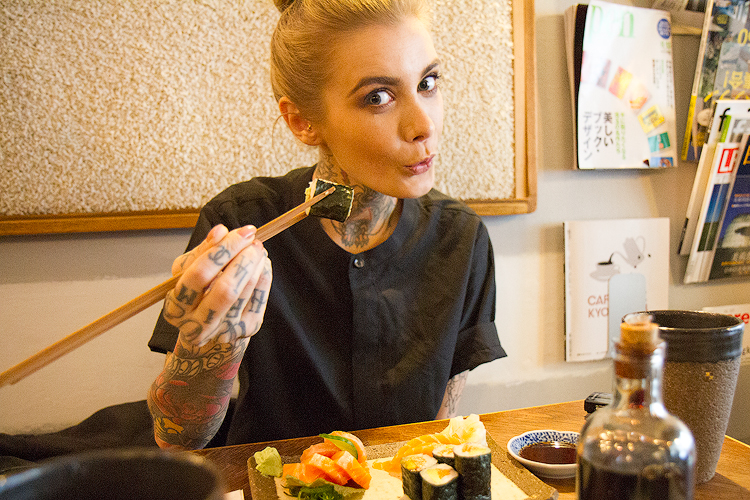 the valentina as we know her started here in berlin, how did you end up here?

I’ve been living in Berlin for almost 4 years now, with the first year being by far the worst. I moved to Berlin because of an ex-boyfriend, knowing nobody and feeling overwhelmed a lot – by all the people and new impressions. I often times felt like – I just want to go home. But in retrospect – it was the best thing I could’ve done.

when did your feelings change?

Like 2 years ago, I had one of the best summers here, and once you fall in love with Berlin, which is only possible in the summer, everything changes. Once you allow Berlin to happen, you’re good. When I finally moved to Prenzlauer Berg, where I really wanted to be, last year, I finally felt like I had arrived.

how did berlin change you?

I’m not shocked easily anymore. Like someone tells you, they got ass fucked in a berghain backroom, alright, back in the day I would’t have ever went. Same with taking things personal, when I started to concentrate more on modelling the first few rejections were horrible and depression ensued – now I don’t give a shit. Stability and self-confidence is something you learn quickly in Berlin, maybe the hard way.

obviously you have been highly successful in the modelling business, what else do you plan on doing?

Now that I’m done with school I want to go off and study marketing, maybe in Amsterdam or so. But I’m not a planer in the conventional sense, I didn’t even want to go back to finish school in the first place, so we’ll see.

Yes, I love Amsterdam. It’s just a cute and peaceful place, the narrow and dense houses, everything’s surrounded by water – and then a crazy red light district – I just fell for the city.

topic childhood – “all parents screw up all kids?”

Yeees! Who says they did have a nice childhood? I don’t know anyone. It was a little gloomy, a little complicated. I was a daddy’s girl, you know, seeking approval, love, and so on and my father was more of a distant person, so that didn’t always work out great, but I knew he loved me so it was okay. Not always the best circumstances, too, at some point my parents divorced and, yea, overall kind of a shitty childhood.

how about school popularity? were you a cool kid?

I was the funny kid, so class mates did like me, like, there was no mobbing or such, but I was no beauty queen either. I did change schools about 5 times too though.

talk about tattoos, what direction do you want to keep on going?

Well I don’t see my tattoos as individual tattoos but as one work of art. I had an idea of how I wanted to look back in the day and since I really like symmetry everything had to be connected. I like to have my arms and neck tattooed but not my cleavage or thighs, because that’s feminine and I don’t want to cover that. So I’ll finish my existing tattoos, colors and shades but on principal I’m where I want to be.

what color would you be?
black

did you already live the greatest day for your life?
nope

what would you miss most on a deserted island?
internet

what would you do with $10 million?
go shopping

what would be your superpower?
invisibilty

would you change your first name?
never

what’s the title of your biography?
“ich”

what is your first memory?
watching Free Willy

you could grab lunch with any person in the world, who would that be?
Conan O’Brien

is there any under the shower singing?
only in the bathtub

are you a perfectionist?
more or less

what would you change about yourself?
my height

do you believe in god?
yes

rather ask for permission or apologise?
ask permission

ideal number of friends in your apartment on a friday night?
1

do you believe in karma?
yes

what are you most proud of?
my career 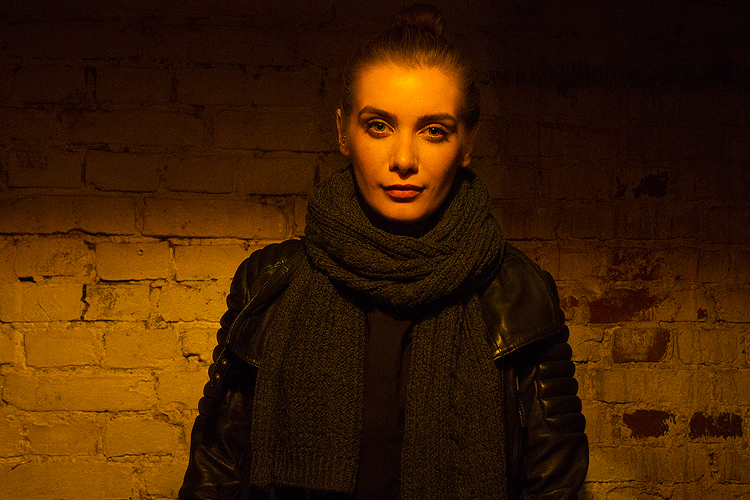 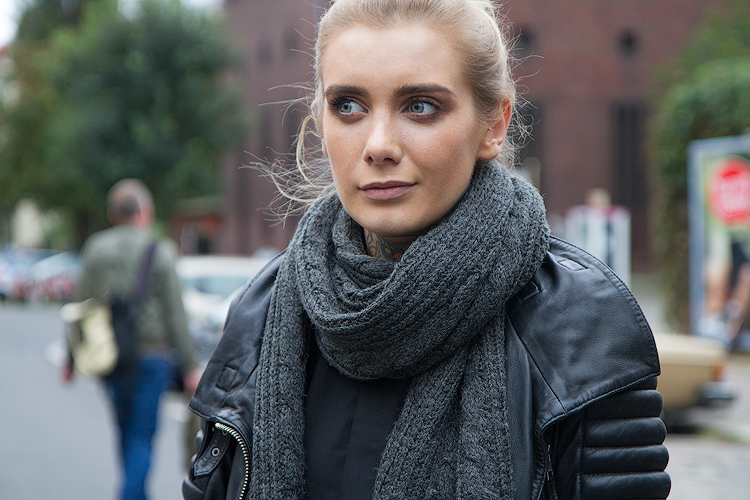 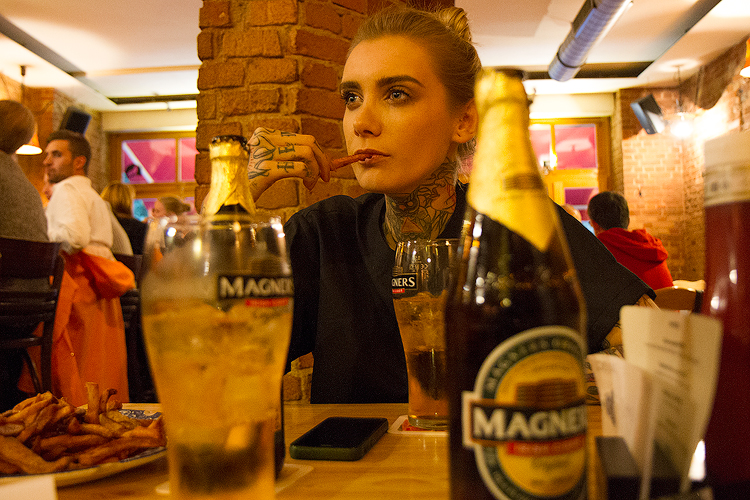 how often has your heart been broken?
too many times

what’s sexiest about you?
my boobs

favorite time of year?
depends on my mood, as long as there’s sun

are you a morning person?
no

finish the sentence: the world would be a better place, if…
people would take better care of animals.

do you buy a book because of the cover?
yes

are you vegetarian/vegan or are there things you will not eat?
no, no and intestines

were you popular back in school?
i was the funny one

do you believe in love at first sight?
no

what did you want to be when you were little?
veterinarian or coroner

would you like to see yourself from the future, if you could?
yes

which of your personality traits do you feel are underrated?
maturity

do you often think about conversations and what you should have said?
yes

would you, if possible, stop ageing right now?
yes

which of your tattoos is your favourite?
i don’t have a favourite

do you make a lot of decisions intuitively?
yes

how can one make you happy?
with little things

chocolate or haribo?
neither

favourite animal?
wolves, cats,… all of them

aaaand what is a question you’ve always wanted to get asked?
this one!